Impact of the EVFTA Agreement on Vietnam's Textile and Garment Industry

Impact of the EVFTA Agreement on Vietnam's Textile and Garment Industry

However, we need to reassess the opportunity from the EVFTA agreement from where, at what time and which goods the EU market needs to focus on exploitation. This article will look together on the overall EU textile market and identify possible opportunities from the EVFTA Agreement so that enterprises can actively build production and business plans.

1. OVERVIEW OF EU MARKET AND CURRENT STATUS OF VIETNAM'S TEXTILE AND GARMENT EXPORT TO EU 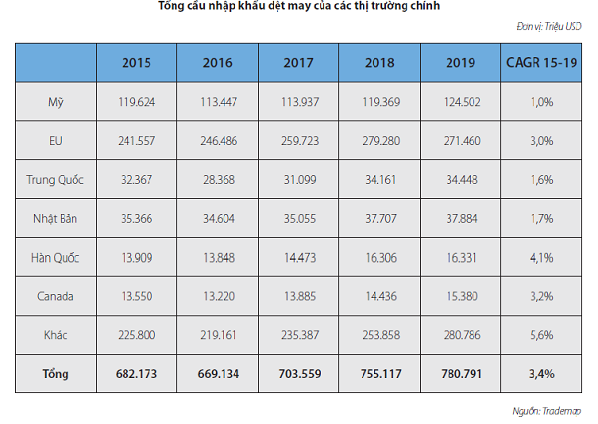 Among developing countries exporting to the EU, China, Turkey and Bangladesh are the three countries with the largest export market share to the EU, accounting for nearly 36% of total imports worth US $ 100 billion.

Although China holds the largest market share, nearly 20% on the EU market, in the past 5 years, the double growth rate - CAGR of China's exports to the EU decreased by 0.1%, while Bangladesh, Pakistan increased by 10%, Vietnam increased by 9%, especially notably Cambodia increased by 17% (from USD 2.8 billion in 2013 to USD 6.3 billion in 2018).

Except for China as a "big player" in the industry, other countries such as Bangladesh, Cambodia or Pakistan all have an outstanding advantage of import tax incentives compared to Vietnam when exporting to the EU. Bangladesh and Cambodia are exempted from the import tax regime under the EBA program (which stands for Everything but Arm program - Exemption from all commodities except weapons), Pakistan is also exempt from import tax under the GSP + program. Although Vietnam is also entitled to the GSP preferential tariff, it is only "Standard GSP - Standard GSP" at 9.6%. 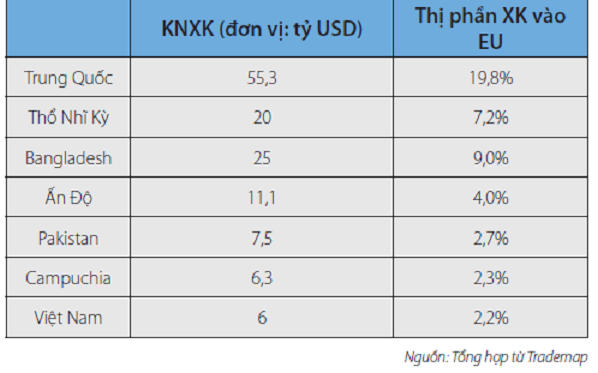 It is clear that the competition among developing countries exporting to the EU is quite fierce, the application of GSP + and EBA preferential regimes help countries enjoy a great price advantage compared to the price. Vietnam. This also explains why Vietnam's export market share in the EU market remains around 2-3%.

The EVFTA Agreement, adopted by the European Parliament on February 12, 2020, is quite important in opening up export promotion opportunities for the textile and apparel industry, especially in the context that the textile and garment industry has been affected. No small movement of US-China trade war over the past year and a half and recently the Covid disease 19. It is expected that Vietnam and the EU will complete the ratification process for the Agreement to officially take effect in July 2020. .

With the EVFTA Agreement, 100% of Vietnam's textile and apparel products will be reduced to import tax to 0% after a maximum of 7 years after the Agreement comes into effect. Specifically, according to the Ministry of Industry and Trade's statistics on textiles, the EU will eliminate tariffs with 77.3% of Vietnam's exports after 5 years and the remaining 22.7% of exports will be removed. quit after 7 years.

Thus, the tax competitive advantages of competing countries such as Bangladesh, Cambodia and Pakistan will no longer be available in the near future. Cambodia is facing the challenge of being officially excluded from the GSP preferential tariff program from August 2020, and the Cambodian textile and garment import tax to the EU will increase by 12% due to violations of some rules. EU regulations.

Along with the benefits of tariff elimination, EVFTA with the rules of origin requiring "from fabric" combined with the "yarn forward" requirement of the CPTPP will continue to promote the formation of a closed production chain. from upstream to tailoring finished products, increasing the added value of the industry and gradually reducing the dependence on the import of external raw materials.

The base tax rate in EVFTA for garments is 12%, from this tax, the goods will be 0% as soon as the Agreement comes into effect or to 0% according to the roadmap B3, B5, B7 - immediately after 4, 6 , 8 years from the date of entry into force of the Agreement for 0%.

Regarding the commitment to reduce taxes in EVFTA, businesses should also note that some items in the first year of the Agreement that the EVFTA import tax rate will be pushed higher than the 9.6% GSP currently enjoyed. . However, the EVFTA Agreement brings long-term benefits to Vietnam's textile and apparel industry, not just the benefits of tariff elimination. The benefits of EVFTA are superior to the GSP mechanism we are enjoying, although in the first year of the Agreement, some products did not benefit from tax reduction because when the EVFTA Agreement came into effect, Vietnam will not be eligible for GSP mode.

According to our statistics, in the Top 10 CAT exports to the EU, accounting for 72% of total exports (exports) to the EU, 76% of exports (in the B5 and B7 groups) in the first year the tax effect will be pushed. higher than GSP, specifically: 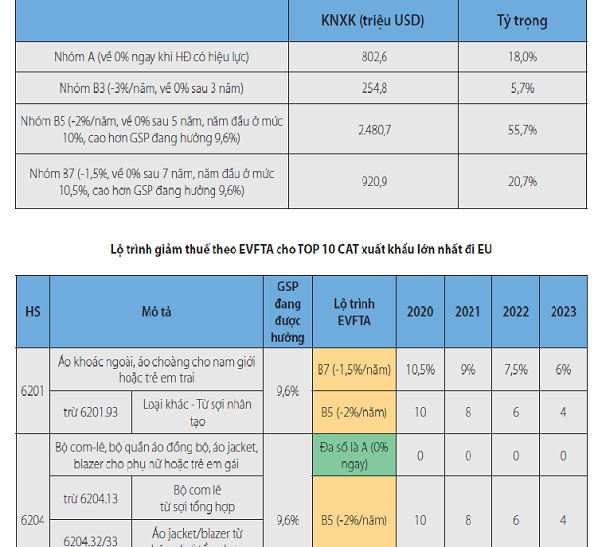 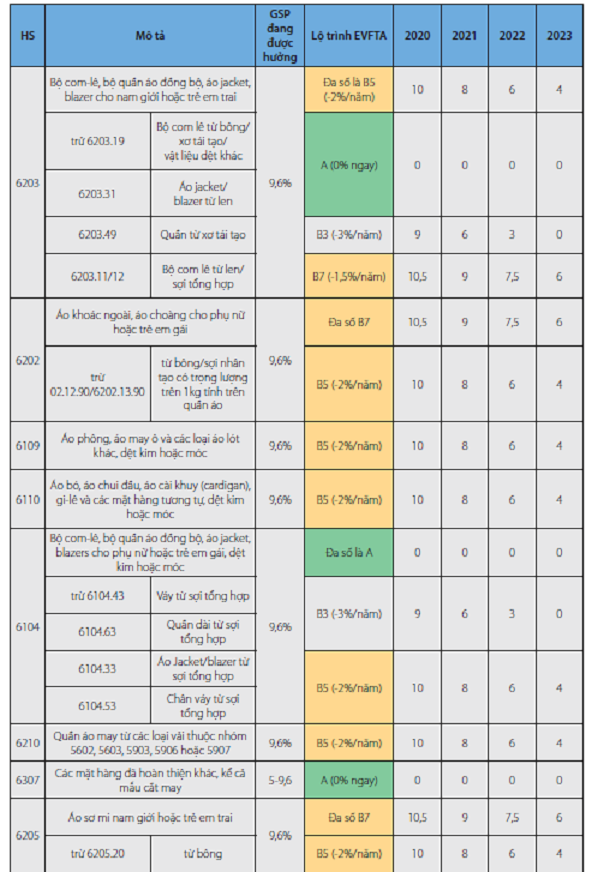 2.2. Meet the rules of origin "from fabric onwards" to enjoy tariff incentives of EVFTA

The principle of allowing Vietnamese textiles and garments to enjoy preferential import tax rates under the EVFTA requires fabric to be woven in Vietnam or the EU and to cut apparel in Vietnam. Note that the rules of origin for textiles under EVFTA are expressed in the form of a "specific production process", not the rules of converting CTC codes such as the CPTPP and signed FTAs. self-rules of business origin are now under the current GSP.

In addition, the cumulative principle in EVFTA allows Vietnamese enterprises to use fabrics of:

(i) Korea or a third country with which both sides sign an FTA (Japan or a future country with the same FTA), or

(ii) ASEAN provided that the preferential tax rate applied to that item is higher than that of similar products of the participating ASEAN country.

EVFTA allows the subdivision of consignments in the case of transit of goods in transit through a non-member third party provided that the goods are still under customs supervision, this is the second FTA With CPTPP allowing businesses to do this, this provision is very convenient for businesses when exporting, they can send large distribution centers to split delivery according to the appropriate season.

3. FORECAST OF GROWTH EXPORT TO EU
The EVFTA Agreement's "fabric forward" rules of origin remain a short-term challenge for Vietnam's textile and apparel industry. The situation of Vietnam's textile industry is not enough high quality fabric for export to the EU, the purchase of domestic fabrics must pay 10% VAT more expensive than imported fabrics, making the benefit of tariff reduction insufficient to offset. Competitive price reduction with other countries.

Along with the above analysis, in the short term, EVFTA will be difficult to create a strong push for Vietnam's textile and apparel industry, such as the time of joining WTO or signing BTA with the US, EVFTA expects to bring long-term benefits for Vietnam. Vietnam's textile and apparel industry in increasing export market share to the EU market, reducing dependence on the US market and reducing risks when the US market fluctuates because the US-China trade conflict has not ended.

Brexit issues should also be noted because the UK has officially left the EU from January 31, 2020 with a deadline of December 31, 2020. The UK is still considered an EVFTA member. Therefore, from now until the end of the year, assuming EVFTA takes effect even this year, enterprises can still use imported British fabrics to produce still meeting EVFTA rules of origin, but the story after December 31, 2020. Currently unclear, depending on negotiations between the UK and EU.

The article was published in the Vietnam Textile and Fashion Magazine, March 2020

Exports: Expecting to “turn the table” thanks to EVFTA

VCN – Suffering from the serious impact of the Covid-19 pandemic, in the first half of this year, export goods of Vietnam recorded a serious decline in all key commodities. This situation would change in the second half if ........

The Hanoitimes - With 16 FTAs in effect or under negotiation, Vietnam has been at the center of a global network of free trade that accounts for 59% of the world population and 68% of global trade.....

USE OF TAG HANGERS

Working together to raise Vietnam-Japan relations to a new level

Vietnam - Japan relations are in the best development phase since the establishment of diplomatic relations in September 1973. "Let's work together to bring relations to new heights.....

Business philosophy: Speak less, do more; Quality products must be cultivated from the root of each business.......

Access to modern equipment and technology as well as increasing the localization rate of raw...

Have you ever wondered where the clothes, fashion accessories, handmade items are sold on the internet.....